NaNoWriMo relaunch is going to happen any day now. I’m so excited I’ll burst. My plot (the first one, anyway) is ready. I’m not MLing this year, so in theory this should leave more time for the community and the wiki. Everything is ready.

Well, almost. Less ready is Wikiwrimo. I had a very long to-do list, but the more I do from that list, the more items that creep up that need to be done. Not everything is going to be done by launch time, and I should just accept this. So should my wrists, actually. They haven’t been happy with me lately. Don’t they know that now isn’t the time to rebel?

To tide you over, here’s a fun pic straight from Google Analytics of what the October/November Wikiwrimo stats looked like for 2010 and 2011. 2010 is in orange; 2011 is in blue. That extended peak in 2011 is from Wikiwrimo’s stint on NaNo’s front page. I believe the 2010 peak is when NaNo mentioned Wikiwrimo on Facebook or Twitter. Not sure which. 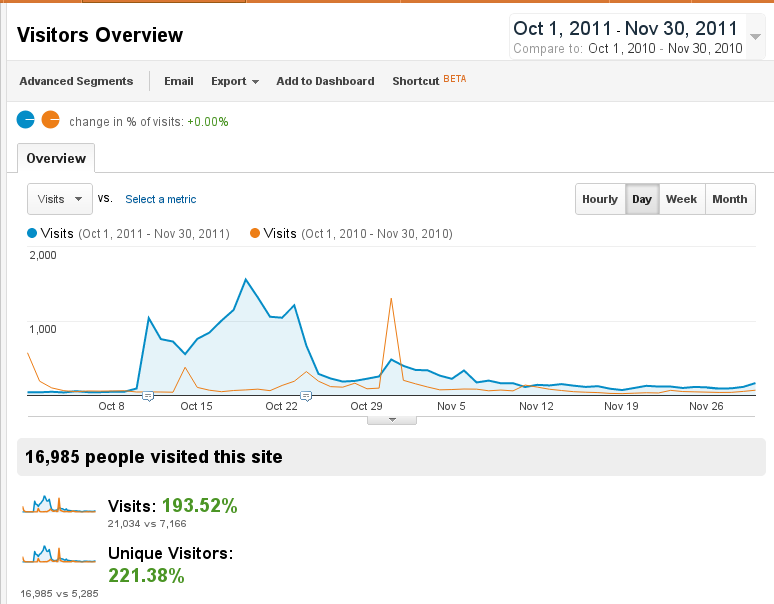 @sushimustwrite I’m so excited for Nano this year too! 😀

Ah heck yeah! I’ve been waiting all year for this!
@sushimustwrite Do you have a plot yet?

Yep, I have a plot! It’s a sequel to Wrimonia, so if you haven’t read it, the next couple of months would be a good time. 😉