Over the past week and a half boyperson’s cats have stayed with me while he’s visiting family. This sounded easy enough on the surface; even though I’ve never owned cats before and my experience living with cats is limited to a very negative experience with a previous roommate’s cat, how bad could this be? I’d just feed them, clean their litter boxes, give them some petting, post their pictures to the Internet, and make sure they don’t attack me like the previous cat did. (No, really. I still have some of the scars.)

I was mostly right. Cats aren’t as needy as dogs, but if they’re anything like Zoe, they’ll want attention all the time. Since I work at home this is particularly problematic since I try not to stop work every fifteen minutes to pet her, and it’s hard to type over a cat. In fact, in the short time I’ve spent writing the first two paragraphs of this post she’s already called for attention at least twice. 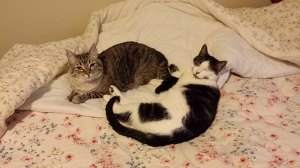 Anyway, here’s what I’ve learned from this cat-sitting gig.

They’re cute.
Seriously, look at the picture above. Stella is the gray one; Zoe is the black and white one. Both are cute. For awhile I was saying “cuuuuuuuuute” about ten times a day and talking to them in high pitched voices and giving boyperson all the cute updates. This led to at least one person concerned that I was slipping into crazy cat lady mode so easily.

They follow you around.
These cats love following me around, whether to the kitchen, the bathroom, or to my desk where I’m working. Since I don’t have a car and boyperson doesn’t live in a transit-friendly part of town, we brought the cats to my place for the nearly two weeks that he would be gone. This put the cats in a new environment for them to explore, complete with boxes and air mattresses in the living room to hide behind and new windowsills to jump on.

So when they see me wandering around, they absolutely must see what’s up. Me cooking in the kitchen? Oooh, me too! Going to the bathroom? I wanna see!

At least they don’t jump on the counter or sink like that previous roommate’s cat did. 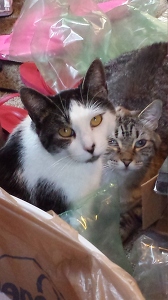 The adoration can be cute sometimes, but…

Sometimes I really want to be alone.

I’m an introvert, and as we all know, introverts gotta introvert. Sometimes I just want to get away from everyone, and yes, meowing cats count as part of everyone. Especially when they jump on your lap and want attention. It’s really hard to concentrate when a cat wants your attention, and when you’re easily distracted as it is, having a cat come up to you and meow for your attention every fifteen minutes doesn’t help.

Sure, I can just shut my door, but some cats will meow for your attention. Zoe certainly will, even while at her main human’s place. I like the sound of silence from not having any pets, and all that meowing doesn’t contribute.

Which leads to a head in paws confession… 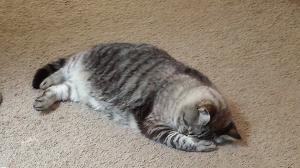 I don’t want them.

That’s right. I previously talked about why I don’t want any kids, but this week in cat-sitting also confirmed my desire not to have any pets either.

“But they’re cute!” I hear you cry. “And they’re so rewarding after the first few weeks when they’re trying to figure things out.”

That’s what they say about kids too.

There’s also the cost of food and litter and vet checkups. And a practical concern here: a lot of those things are heavy, and I don’t have a car. I can order food and litter online, but vet checkups are another story. Taxis exist, but how many will let you take animals in?

Having a pet, like having a kid, would limit my freedom. Want to go on a trip? I’d have to find someone to watch the pet. Want to stay somewhere overnight? I’d have to make sure the pet was accounted for.

In the end, I value my individual freedom. This doesn’t mean I hate animals; it just means I want the freedom to do what I want when I want. It also means I have the freedom to borrow your animals if you let me. You can have them back soon.