Google Glass hosted a demo event in Atlanta this weekend. It was a free event open to the public, but RSVPing was strongly encouraged. Since Glass is currently available to a small group of people through the Explorer program and isn’t cheap, the opportunity to try it out before it came out to the public excited me. I couldn’t fill out the RSVP form quickly enough.

The event itself was at the Foundry at Puritan Mill in the West Midtown area of Atlanta, a lovely and huge space with an industrial feel. A host greeted us outside the front door and asked if we were here for Google Glass. We were, and she ushered us in. Another person from the Google event staff handed us a small pamphlet showing off Google Glass and told us it would be about a 20-minute wait. We got in line and waited. 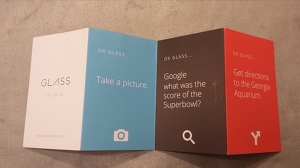 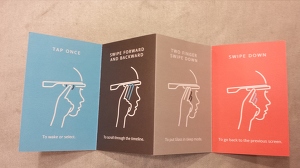 The line consisted primarily of techies who had been waiting for this opportunity for ages filled up the line for the most part, but some folks had just showed up. The person in front of me mentioned Reddit multiple times, and I got the feeling he was overhearing my conversation with the boyperson when I mentioned Reddit and Pokemon and other nerdy things.

We reached the front of this line and checked in at the tables up front. The person behind the computer got my name and noted that yes, I had RSVP’d. After filling out the waiver (which basically said Google could take photos and video and use them in their materials), we found ourselves in another line.

Luckily this line was much more interesting. A Google Glass guide explained the basics of how to use Glass and what it could do. Contrary to what I had previously believed, Glass isn’t just a screen projected in front of your eye; you have to look up to see it, meaning Glass stays out of your way until you need it.

The basic Glass capabilities include:

An Android/iOS app called MyGlass helps you manage and configure your Glass device so you don’t have to do all of it through Glass itself.

And finally, we were in. 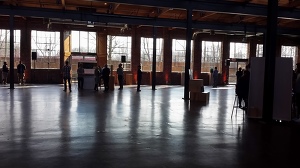 The first stop was to try on a set of Google Glass and get to know their features. 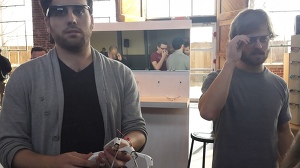 They explained the basic features, how to use them, and yes, you had to look up to see the Glass screen. (I’m guilty of taking a few minutes to notice this.) I didn’t notice Glass too much behind my ears the way I notice regular glasses.

Glass itself is made of titanium and can be bent; this was the first thing I tested. You can probably drop Glass and not break it, but I wouldn’t advise it. You can adjust the display so it’s closer to or farther away from your eye. The button at the top right side of Glass is an instant camera button, and I found it was faster than saying, “OK Glass, take a picture.”

The standard Glass doesn’t come with lenses, but it can be fitted with prescription lenses. Glass also comes in several frames and colors. 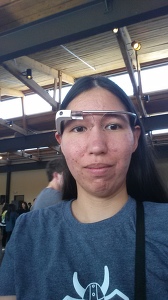 One thing I did find difficult was navigating back and forth between things I wanted to do within Glass. This is something that time and practice can improve. My default behavior when getting a new gadget or program is to declare a holiday and play with it for a day or so, learning all its configurations so I can use it in the best way possible. That’s not possible in a quick demo session.

But I still mastered some functions, like taking a photo and video and searching. Swiping through search results was a little more time consuming since I liked teasing Glass with weird searches like “why you shouldn’t eat sushi”.

No one rushed us through the demo, so I tried everything out at my leisure. I didn’t take all day, though; there were other stations to visit.

The second Glass station included Word Lens, a third-party app that would translate whatever you were looking at. There were signs in German, Italian, Portuguese, and English. All you had to do to translate was look at the sign, say “OK Glass, translate this”, and select the original and destination language. I found this the most impressive feature of everything I saw yesterday; watching the letters form foreign words while maintaining the same font was nothing short of magic. Imagine traveling to another country with Glass; between these signs and the standard translation feature, you would have a much easier time getting around.

Unfortunately I had trouble translating the English “Welcome” sign to other languages. Since the other signs translated fine, this may be a bug in the app. I reported it to the folks running the booth after a few tries and moved on. 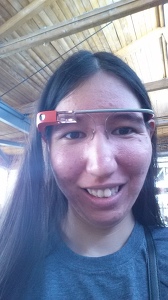 My next stop was the music station. Google Glass can come with earbuds so you can play music within Glass. This can be music in your own collection or music from the Play all-access store, something I didn’t know existed until yesterday. I just said “OK Glass, listen to” followed by the name of the artist or song. This didn’t work too well to my advantage, but then again, I tested the store with its selection.

It did have Jonathan Coulton’s “Skullcrusher Mountain”, which came up as the first result. I tapped once to play the song, and immediately the song started playing in my ears. Another tap paused the song.

Eventually I got tired of messing with the music.

The demo session also included a photo booth. Participants could try on any pair of Google Glass, get their photo taken, and share it online. They also received a physical photo. I jumped into the short line and chose a frame. A minute later a Google event person was taking my photo and I was sharing it on Twitter. 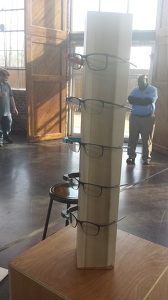 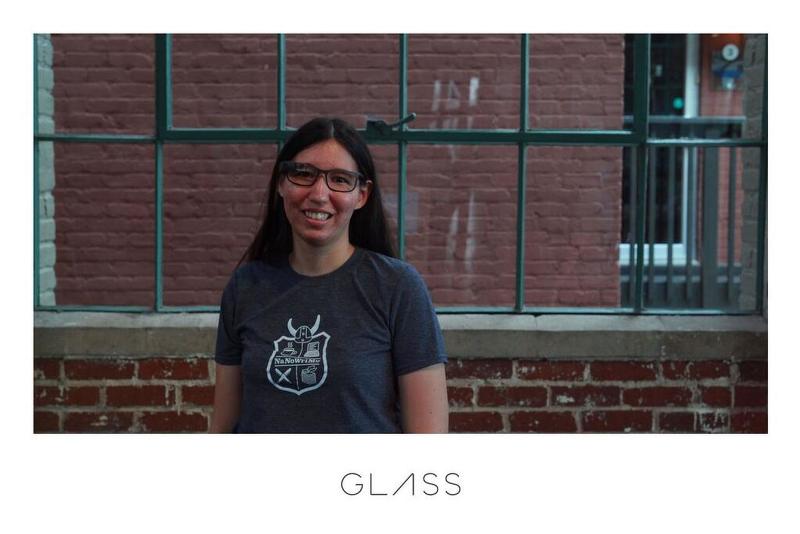 I also got a look at the various Google Glass prototypes along the far wall: 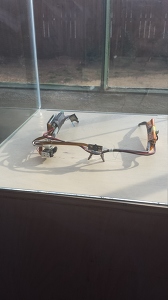 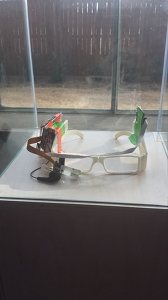 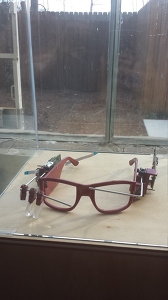 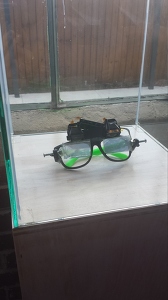 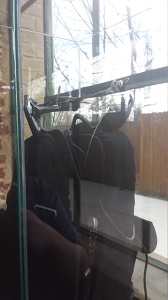 You can’t tell too well with the last one, but that’s a phone attached to the glasses.

After that there wasn’t too much left for me to do; I took their exit survey and received a Google Glass poster. Sadly I didn’t get to chat with any of the developers about what they had planned, as they had already left. But I filled out the exit survey and chatted with the staff for a little bit before eating some of the free food (which was excellent, by the way) and heading out with lots of opinions on new technology.

That’s what you came here for, right?

Google Glass is very good at what the event guide described to us in the beginning: “hands-free, heads-up”. That is, a smartphone and tablet weren’t taking up precious hand space and you weren’t burying your head in it while you were out exploring life. I can see how Glass would be valuable to a lot of people: capturing moments instantly without having to whip out a camera, directions right in front of your face without looking down at a map or phone or GPS, satisfying your curiosity without digging for your phone and searching for something, sharing the moments you care about even more quickly.

As for using Glass in my own life, I’m not sure. It’s an excellent product, absolutely. But I couldn’t get used to looking up and seeing the Glass screen. It takes time to get used to, but I found myself physically tilting my head to see the screen.

There’s also the consideration that using many of Glass’s features requires saying them out loud. This is where a smartphone wins for me. The smartphone lets you type, giving you some level of anonymity to the world around you. With Glass, much like a phone call, anyone around you is going to hear what you’re up to. This brings up some questions on how not to be a jerk (glasshole?) with Glass and what the social conventions for Glass will become.

Despite all these considerations, I’ve still signed up for the Explorer waitlist. If a space opens up and Google invites me in, I’d get a chance to buy one for $1500. Considering I don’t usually have that much money to spend on a gadget I might not love and use daily, I may or may not dive in.

None of this is to say Google Glass is bad. Quite the contrary–Glass is modern, well-made, and it makes me feel like I’m wearing something from a futuristic scifi work. Check it out if you get a chance.