Since NaNoWriMo remained all-virtual this year, there was only one thing for a Sushi to do: Continue the virtual world tour. I kept the same rules as last year’s tour with one twist: No repeat visits. And yes, this includes last year’s visits.

This twist eliminated almost a hundred regions, but hundreds of regions remained to visit. I set out on the tour, hoping to visit at least eighty more. With four non-weekend days away from work throughout the month, comparable to last year, this felt like an achievable goal.

Most of the logistics are the same as last year. Here’s where I talked about last year’s virtual world tour.

END_OF_DOCUMENT_TOKEN_TO_BE_REPLACED

2021 was my 20th NaNoWriMo. I had big dreams after last year’s virtual world tour. I’d write a lot of words. I’d reconnect with Wrimos new and old. I’d write my best book to date.

But the panini still wasn’t done cooking, so once again, NaNoWriMo was all-virtual. Womp.

The world tour post is coming, so let’s talk about the writing first. 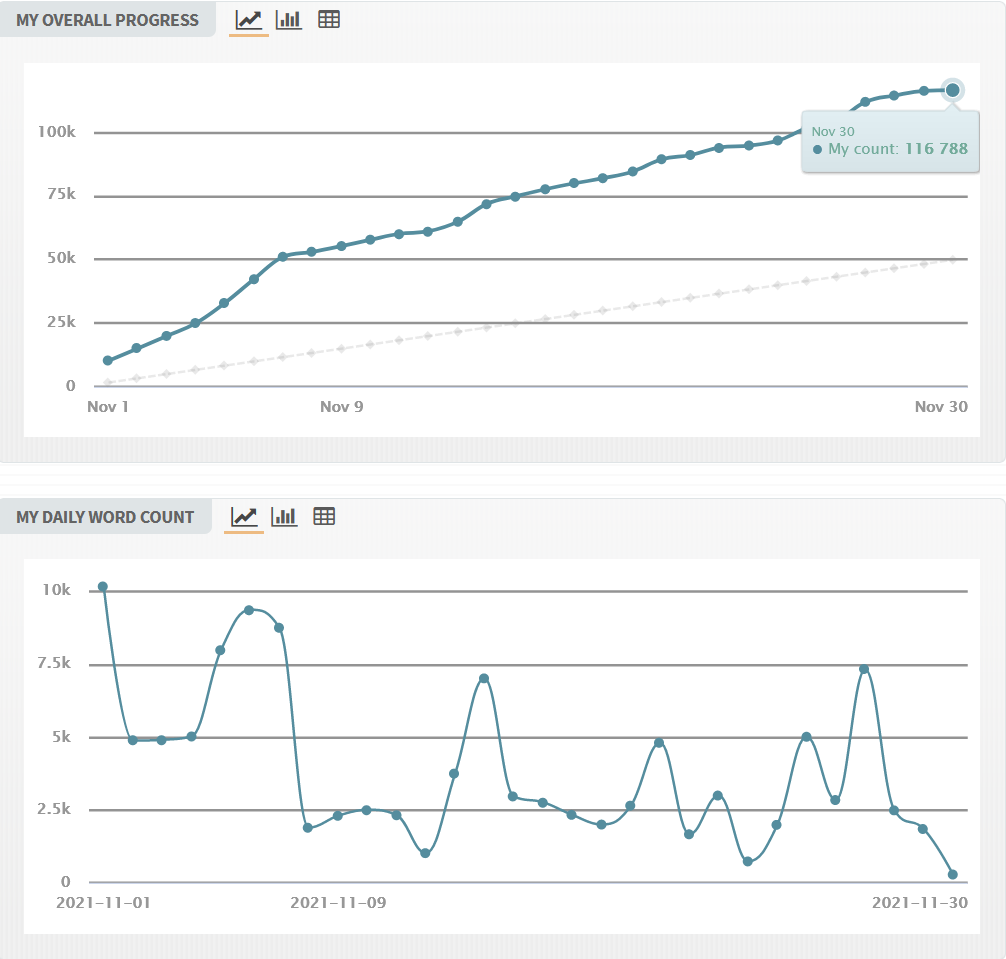 I won’t lie, this November was hard. For once I had an idea over 24 hours in advance: a rewrite of my 2019 NaNoWriMo novel, where a human is the test subject for an AI version of herself and everyone likes the AI version better. Despite a big start and reaching 50,000 words on day seven, I fell flat on my face after that, struggling for days at a time despite attending multiple write-ins most days. I thought one book would be enough to reach my goal of 100,000 words because the first draft crossed that line handily before I had any idea of the deeper story happening.

So I found myself dumbfounded when that book ended at 86,000 words. Now what? I couldn’t let a six-digit streak die. Heck, at this point I’ve written the double NaNo longer than I haven’t. I considered writing scenes that should have happened earlier in the book but decided against it; doing this would send me down the rabbit hole of editing. Instead I flipped through past NaNo projects in search of one that could use that NaNo magic with a rewrite and was disappointed when I couldn’t find any. (In fact, I couldn’t remember some of those stories in the first place. Oops.) In the end I wrote about a side character from last year’s novel, the main character’s best friend who moved before the main events of the story.

Wow, that book was a slog. I had a general idea but it became apparent early on that I should have set the book in the fall semester instead of the spring semester and wow, these teenagers were acting like miniature adults because all they cared about school and the main character got into Tetris so naturally I took a lot of Tetris breaks for “research” as the month wore on. All these mistakes I made early in the story hammered at me in the back of my head, but there was no way to go back.

I left the second book unfinished around 30,000 words. I need to figure out its general direction, but I’m glad I started it. This book is the other perspective of my 2020 novel, and having a companion book in the works will be nice if the first one gets published.

The current state of the world led to some interesting questions in my novels. For context, both books take place in the real world’s San Francisco Bay Area, but the scifi book takes place in the near-ish future and the young adult novel takes place now-ish (minus the pandemic). I was hesitant to nail down the exact date of the scifi novel because it would open a lot of questions: How old were the characters during the pandemic? What else has happened to the world since then? Has society become more or less divided?

The scifi novel’s characters work in tech, and as I wrote scenes of them in the office I found myself thinking things like “Would they even be in an office? Will the pandemic shift the world that much? Will Silicon Valley still be a prestigious place for tech ten or twenty years in the future?” These are questions we still don’t have an answer to, especially as certain major tech companies aren’t embracing a fully remote company. This comes up more in tech for folks who have to work with the hardware. (Hey, someone had to build the AI body.) These questions never came to mind when writing the first draft in 2019 because they didn’t have to.

The young adult novel brought up similar questions. It takes place in the same universe as a novel I’ve drafted three times since 2015, when the American political atmosphere was starting to become more divided but not as starkly as it is now. A lot has changed in those six years, from the apps teens use to what we think of people we disagree with.

I also found myself thinking of how (or whether) to address the current political climate. Doing so would require placing my novel in a set point in time. For now it’s easier to write in an alternate universe where the darkness of 2016 and beyond never happened, particularly 45’s administration and the pandemic. Depending on how long I edit this novel, continuing to do this will look naive without explicitly showing the alternate timeline. Writing from a position of privilege and hiding from the present would dismiss the suffering of others who want and deserve to see themselves represented.

Which leads to my other lesson and question from this NaNoWriMo: There’s a lot of worldbuilding involved in writing contemporary fiction. Since both of these take place in some sort of alternate timeline, I need to establish some rules before editing. What happened with the pandemic and 45’s administration and that aftermath (if those things happened)? If they didn’t happen, what did happen? How did that change society?

And how can we use those possibilities to change our society for the better?

October is here, NaNoWriMo is less than a month away, and I swear I had a plot but it ran off somewhere.

Let’s talk about write-ins. Last year I took the all-virtual NaNoWriMo experience to the extreme, which sent me to 84 regions and 13 countries outside the US. Besides being the one bright spot to a crappy year, it was also an adventure in the many online technologies MLs were using to bring writers together, so I’ve put together this post about each tool to help others out. If you’re a first-time ML or thinking about switching tools this year, welcome! This post is for you.

I can’t recommend a specific tool for every region because every region’s needs are different. Instead I cover my observations based on my experience as a participant and what I could piece together from the host’s standpoint. Note that a shorter list for one tool doesn’t mean that it’s bad or I didn’t like it; it just means I didn’t get as much experience with that tool.

END_OF_DOCUMENT_TOKEN_TO_BE_REPLACED

Note: This post contains major spoilers for the end of The Good Place. Yes, the very end.

END_OF_DOCUMENT_TOKEN_TO_BE_REPLACED

The beginning of 2021 has been excellent for reading, not just for the quantity but the quality as well. In fact, the time since my last book review post — written around the time I started my current job — has been full of good books with few true flops. Since there are so many books to cover I’ll just summarize the books with the highlights… even if that means most of the books.